WA and Olympic Peninsula, May 2011 – Part the Third, Backpacking

Summer has come waltzing in, and it seems to be a pretty hot week here. I like it. My plants are growing well – the tomatoes and cucumbers and peppers are all flowering. It’s getting pretty close to wedding season, and between that and the house, we haven’t managed to go out and do all that much so far this season (though we did manage to make it out to Corbett’s Glen Nature Park for an hour or two today. Hooray!). We’ve stained and sealed some borrowed patio furniture, which is kind of like going camping, except entirely different. So let’s keep on talking about doing some camping in Washington 🙂 After some travel and photo interlude, we set on out up the Quinault River… Pony rides at the Pony Bridge

The next morning we got up and continued on our way to the end of the road, where, after futzing around for a bit, we managed to get ourselves in gear and head off down the trail. The morning started out (shockingly) somewhat damp, as we headed out on the trail. We very quickly crossed a bridge, and shortly got to a trail junction, where we followed the directions to the Enchanted Valley. Everything…everything in this place is green. Or covered in green, but so covered that you just think its green. Life is so profuse and lush that it feels almost predatory. If you died there…your body would not remain visible for long. http://www.wta.org/go-hiking/seasonal-hikes/hikes/quinault-river Enchantment…or Graves? We headed for Enchantment (…though we never quite made it) The trail at this point heads up ..and up…and up a bit more, though we did take a break when a mule train headed out past us, carrying more fragrant cedar planks from a downed tree, that they were planning to use for roofing elsewhere in the park. I guess it can stand up to the incessant water. Anyway, at the top of the slope, there was a very sad, losing, picnic bench, decaying into the background. From there, the trail starts heading back down to the Pony Bridge, where I induced Beth and Alex to “play pony”, in return for letting Alex photograph my “squirrel face” earlier. We stopped at the bridge for a bit, because, well, we were tired, but also, it was really super pretty around there. Those cedar planks smelled *so good* going past. Yet another picnic table that wasn’t quite right

There’s another small campsite just past the bridge at about three miles in, and there were several more amazing views of the Quinault River here. There were other hikers at this location, but for many of them, this was the turnaround point. We kept going, but were warned that one of the bridge crossings was out, so we would have to do a bit of somewhat-less-safe log walking. The trail was, how can I say…green. And damp. There was never really rain per se, but more or less continuous dripping and dropping and slight splashing and generally wetness. The few bits when it just stopped were very nice though. Someone had managed to lay a log across the one more dubious crossing, and we managed to make it over, though the log did not, in fact, feel great. I am pretty sure that was Fire Creek. So very very green…the tree monsters are coming to get you! I’ve had several log crossings before, and despite looking ok, this one was pretty dubious

As we continued along, at various points, we saw a a crazy skeleton on the trail, fallen trees (some of which we had to climb over) yet more creeks, and, as mentioned…green everywhere. We didn’t think we were going to be actually to make it to the Enchanted Valley (some 13 miles in), but we had been thinking of making it to the Pyrites Campground, some 10 miles in. However, at about 7 miles in, at O’Neil Creek, we decided that it would be a good time to pitch our tents. We went down off the trail down to the campsite, and found a nice wide open site next to the river. We set up our tents, explored a bit, and then passed out for a while. Then Alex, I believe, but probably also Beth wanted to keep going on a bit, so Dave and I strapped our shoes back on and we headed a bit farther out. This animal is no more. We went about a mile farther, managing to see both a bear in a meadow, and taking the chance to sing a very lovely happy birthday to me on the trail (oh – this was on my very own 31st birthday, indeedly do neighbor!) We made it as far as “No Name Creek”, about a mile an a half farther, and decided that with sore feet and declining light, that turning around was the better part of valor. We though for a bit about staying a second night and actually getting out to Enchanted Valley, but at the end of the day, well, called it a day. So we went back to the campsite, and ate some Indian food, and Alex kindly presented me with a piece of fudge he had had sitting in his coat since a winter ski trip. Mmm. Sugar. Stale sugar. And then, eventually, we passed out. So – ~17 miles RT. Clambering through the woods

The next day was fairly nondescript, at least the hiking portion. We…well, we packed up and hiked out. On the way back, they were working on the bridge over Fire Creek, and even their “temporary alternate” was a bit more stable than the way we had come in the day before. After we had made it out (and I was definitely the last, slowest, member of the gang), we drove just back to Lake Quinault, and stopped in at the lodge (which I thought looked very nice and had a great lobby) and had some coffee, after which we got in the cars and drove back Seattle wards. 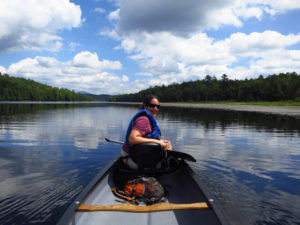 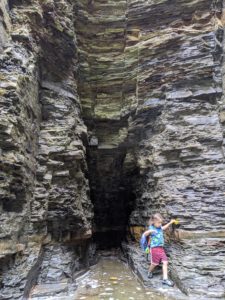 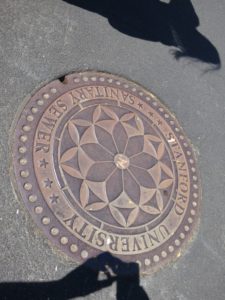 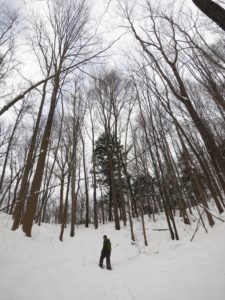