EDIT – some photos are now up. click through them for the actual albums.

Well, my server is having issues at the moment, so none of my pictures are posted, so I am just going to dump stuff from my hiking notes files. In brief, I went up a mountain with Amittai in Scotland, and I went camping (first time with no car!) with Joe. Both of these were pretty awesome trips. I also dicked around Holyrood Park with Amittai for a bit, and we went up Arthur’s Peak, but I can’t really call that a hike, even with the mile or so walk there. Nice views though. Also, “I’ve gone back to the gym” 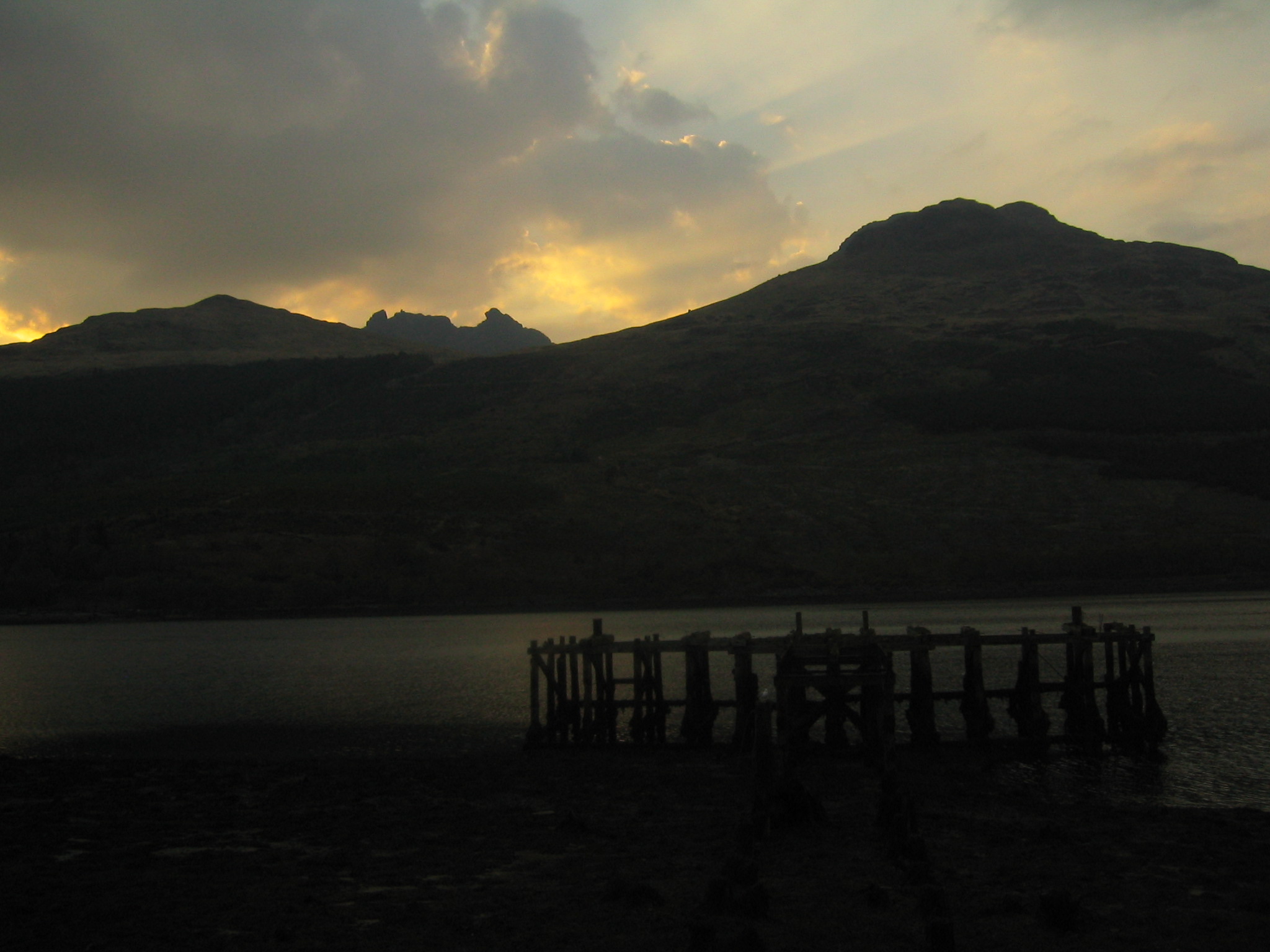 The mountain in the middle,in the back, is the Cobbler. Loch Long is right in front of us in the view.

This is a peak in the southern Highlands of Scotland, one of the better known peaks up there. I took a bus from
Edinburgh –> Glasgow –> Arrochar with Amittai. The bus lets you off at Loch Long, where you walk an easy quarter
mile or so around the lake to the beginning of the trail. You start up some nasty switchbacks, mostly unpleasant
because they are newly cut into a clear cut hillside, and you get very close to a wooded area, but never get to go
into it. There is ~1000′ of elevation gain here, quickly, then you get into the coire, and just sort of meander along
the river for a while, drawing closer to the mountain.

Then we started right up the front face of the mountain, passing another Arthur’s Seat. The scramble up the front
is pretty steep. At the top, there are choices of which of the high points to go to – we turned left to the “needle”,
which is the actual summit, although we didn’t quite climb onto the rock at the highest point – it was just a bit too
death prone. We did talk to this cool older Scottish guy up there for an hour or so. We came back down the backside
of the mountain, a much simpler route, involving a lot of stone stairs placed into the hillside, then back looping
around the mountain, through a bog (all the knowledgeable Scottish hikers had gaiters…) then back up to the old
trail. Not a Munro (those have to be 3k’) but a nifty peak nonetheless. Guesstimating 7 miles roundtrip or so, with
about 870 meters of elevation gain (the peak is at 884, and we started at 15 or so). Ordnance Survey Explorer Series
0364, Loch Lomond North: Tyndrum, Crianlarich and Arrochar (Explorer S.)

The mountain is the odd shaped thing in the back/middle.

Amittai acting as surefooted guide, saving us from all problems and calamities!!

dorks at the peak. The thing behind us is “The Needle”

Look at the right side, and see the *enormous* stone staircase. Oh boy!

Ben Lomond is the mountain off in the back left, and Arrochar is the town so neatly arranged around the lake below, as we were coming back down.

My first ever camping trip! Drove up to Ojai, then further up into the forest. The trailhead parking lot is closed, so we
park about a mile up the road and then head down a horse trail (0.3 miles) to the trailhead for the Sespe River Trail. The
river itself is pretty high , as such things go for Southern California, which means it was several feet in some places.
We basically just followed the trail for quite some while. The heat was pretty punishing, but the wildflowers were
awesome. The second stream crossing basically required shoes off, so I ended up walking most of the way in in my Chacos,
which worked out a lot better than I expected. We forgot to eat lunch, and at right about the 7 mile point, after some
shallow but steady ridge climbs, I was totally freaking zonked. Conveniently, we were right next to the Oak Flats
campground at that point, so we stayed there. (Well, actually at some random campsite right across the river from Oak Flats.
We named it the “Fucking Beetle Campsite” because we saw a dozen or so pairs of copulating beetles. Totally hot.)

We failed to go swimming the next day, because the awesome looking swimming hole was closer than we thought it was, and
we hadn’t want to stop that early. We saw a couple of horse/mule trains on the way out, which was kind of neat.
There are lots of awesome long terms trail in the Los Padres. We drained our water about 1.5 miles from the car (6.5 L
between us), and we just pushed on through the rest of the way (just slogging through the last river crossing, not bothering
to change our shoes). I collected the horseshoe I had seen on the way in, so that’s my souvenir from this hike, plus some
photos I guess.

Mmm, wildflowers. Although I did overexpose this a bit. Eit!

And finally, the instant freaking sandal tan, from wearing the sandals for so long.